On Saturday, we had the skating parties for both Madelyn and Hannah. It was so nice. When we had Natalie's party back in April, the skating rink was so crowded and a little scary with the little kids out there skating with the big kids. But this time, I think that the only people there were the kids that we invited to our 2 parties and the kids for one other party ( A girl who happens to be on Madelyn's soccer team). So pretty much, the whole rink was full of girls the age of my girls. Plus a few stragglers. It was like the kids had the whole skating rink to themselves.
Madelyn has been planning her cake for the last 6 months. She saw some premade flowers at Lucky's and has had her eye on them the whole time. It was real pretty, and she was very excited about doing it herself. I just helped spread the icing. 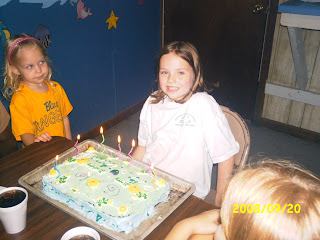 I went ahead and made a cake for Hannah. Normally, I let all the girls pick out a character cake at the grocery. I didn't give her a choice, just asked what she wanted on her cake and what color icing. Of course she wanted pink icing and wanted a butterfly on it. I wasn't too proud of my results, but she liked it and that is all that matters. She picked out some chocolate chips with white sprinkles on them as her candy to decorate with. I can't remember what they are called. 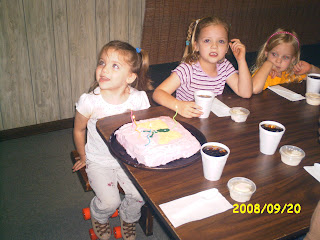 We have been very busy with soccer lately. Both Madelyn and Natalie practiced on Monday, Tuesday, and Thursday nights for the last 2 weeks, but this week, the games have started and until the end of October, they both play at least 2 games a week. They are doing great and are a lot of fun to watch. Surprisingly, there is only one night where their games overlap and they overlap by 30 min. so Aaron and I will have to split up for that one.
I am not leaving the house until I have to go to work tonight at 6:15. I hope at least. Yesterday, we drove to town for storytime at the library and to get more water and cokes from the store. Then we came home for a few hours, then had to go back for Brownies at 2:45, where I left the older two and took Hannah with me to run some errands. Came home at 4:45, then Aaron and I drove separate to Madelyn's soccer game @ 6:30 because I was planning on going to a meeting as soon as it was over, but no one showed, so we could have gone together. So, I am glad to stay here and hopefully get some housework and schoolwork done. I take some schoolwork with us when we run errands, if I know we will have a chance for them to read to me or something, but it does take longer when you aren't at home. 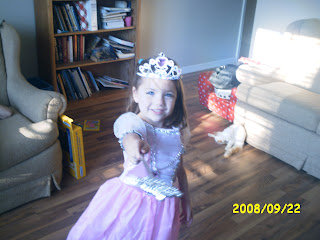 Hannah is turning me into a frog in her new princess outfit she got for her birthday.
Posted by K. Pirkle at 9:55 AM

the birthday parties look like a lot of fun!